ReviveATL Ignites and Inspires a Crowd of 2,000 to Put Love Into Action 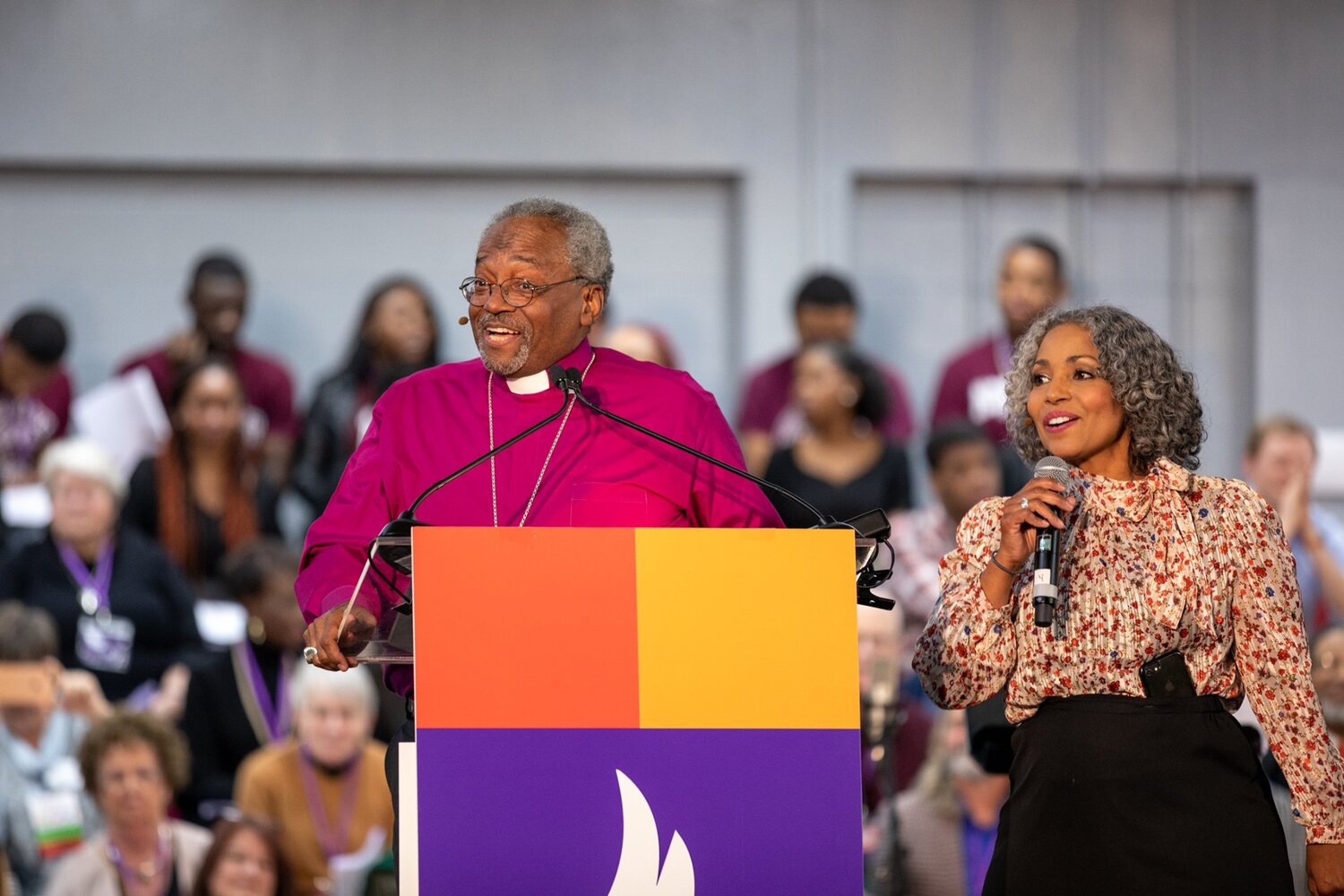 Presiding Bishop Michael Curry had the crowd rapt at attention throughout his sermon, one of many highlights of an engaging evening.

ATLANTA, GA — Wednesday evening’s ReviveATL proved to be a soul-stirring, inspiring event that brought out spiritual seekers from across Atlanta’s Episcopal community and beyond. People came in droves, some (like a contingent from Canterbury Court Retirement Community) arriving by bus or shuttle. And though it was chilly outside, inside the packed Epps Gym on the Clark Atlanta University campus, nearly 2,000 joyful worshipers made the atmosphere warm and alive.

The event was a huge digital success as well, as the livestream of the revival received 17,313 views throughout the run of the program.

It was a night filled with beautiful music, prayer in English and Spanish, and powerful, emotionally moving speeches, each carefully planned segment focusing on a different area of priority or service for the Diocese — children, veterans, refugees, and prisoners.

A beaming Bishop Robert C. Wright set up the passing of the peace by addressing the crowd of “men, women, children and feisty seniors” to prepare to “do something a little different” — and find three people you don’t know to welcome.

Representing the youth of our Diocese, Arianna Castillo, a junior in high school and parishioner at St. Catherine’s in Marietta, spoke eloquently and confidently about the calling she felt to become involved with the church, and the unbreakable friendships she had forged through youth trips and Episcopal summer camp. 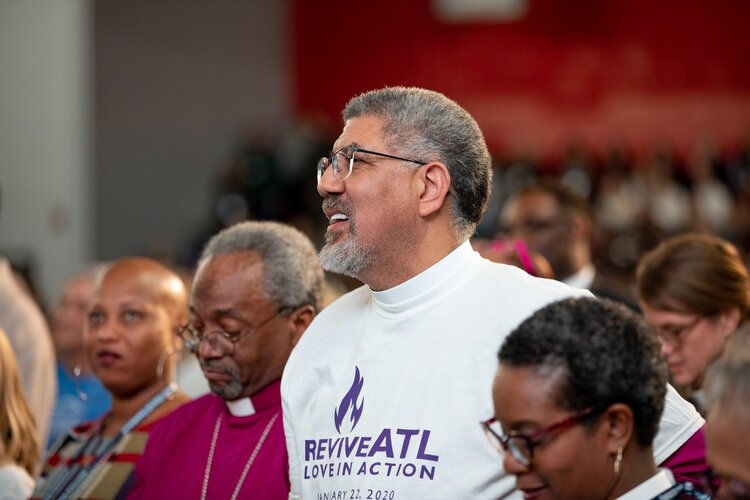 When the discussion moved to veterans, the Rev. Dr. Donna Mote, recently featured in a Washington Post piece about her chaplaincy at Hartsfield-Jackson International Airport, spoke about the “hard and holy work” of escorting the remains of soldiers returned for burial from areas of conflict across the world. “I am the companion of the companion of the corpse,” she said.

Ministering to those tasked with returning these soldiers’ bodies to their families, she said, “I hold space for them to get what they need to finish their difficult mission.” Mote will soon begin a new role as the very first Episcopal chaplain of the Georgia State Defense Force, which deals with disaster response and search and rescue.

Anamaliya, a Rwandan refugee, spoke powerfully about survival and forgiveness. When she was 13 years old, her entire family was murdered during the 100-day genocide in 1994. As an orphan and refugee, having just experienced unfathomable loss and despair, and facing great uncertainty and fear, she said, “I didn’t know God yet. But God knew me.”

Taken in by a Christian family, Anamaliya gravitated to words of hope in scripture. She felt moved by the sacrifice made by Jesus. And when she came to the United States as a refugee, she said that, “like Paul, I learned to be content with any situation.” She has dedicated her life now to helping fellow refugees. 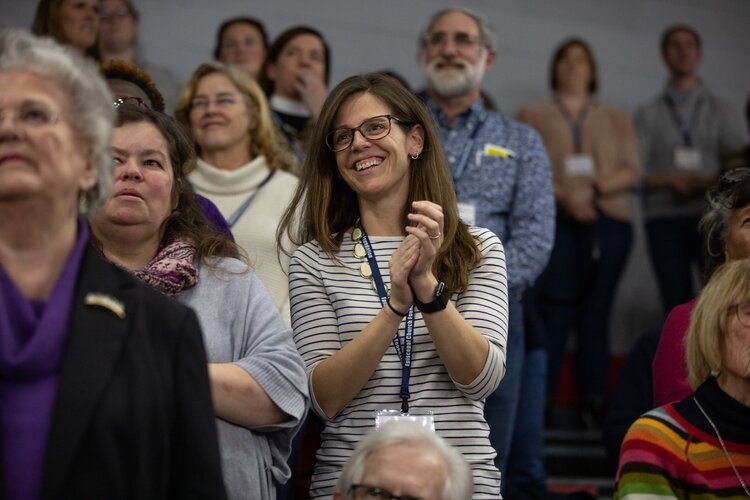 Dock Anderson, organist and choirmaster at St. Margaret’s in Carrollton, told of the profound and radical welcome he felt from the church when he was hired after a long, difficult job search as an addict in recovery who had served prison time for distributing meth.

“They told me my story — rather than being viewed as a liability — should be viewed as a gift,” he said.

The welcome he felt at St. Margaret’s also extended to his identity as a gay man of faith. Unlike some churches he had worked with over the years, which had expressed hostility or discomfort with the LGBTQ+ community, Anderson said “no one batted an eye” at St. Margaret’s when he showed up with his longtime boyfriend.

Three years since he was hired, Anderson prides himself at being part of a place known throughout the community as “the church that helps people.” 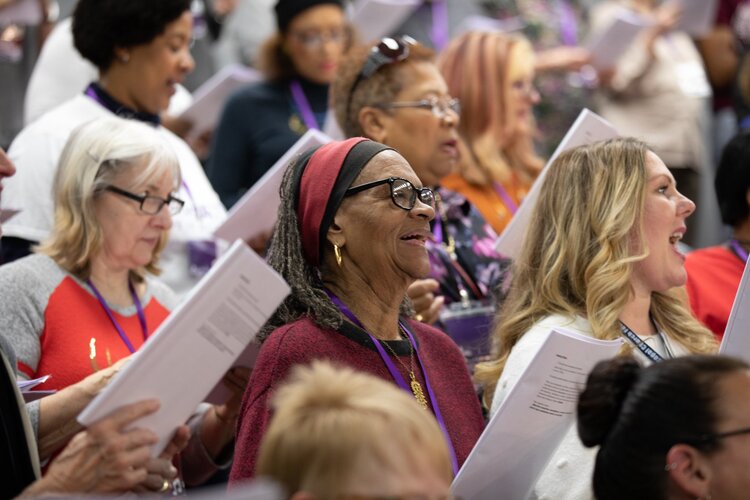 Finally, at the end of the night, the crowd was treated to a boisterous and riveting sermon by Presiding Bishop Michael Curry, who strode onto the stage opening his arms to the crowd: “Atlanta!” Instantly, people were on their feet cheering. Throughout the night, his allusions to local Atlanta staples drew thunderous applause and stomping in the stands.

Marveling at the size of the crowd, Bishop Curry quipped, “Bishop Wright, you must be doing something right.”

In a sermon packed with references ranging from the Will Ferrell movie “Talladega Nights” to the impeachment trial of President Trump, Curry expertly wove seemingly disparate themes together to illuminate what exactly the Way of Love is all about. 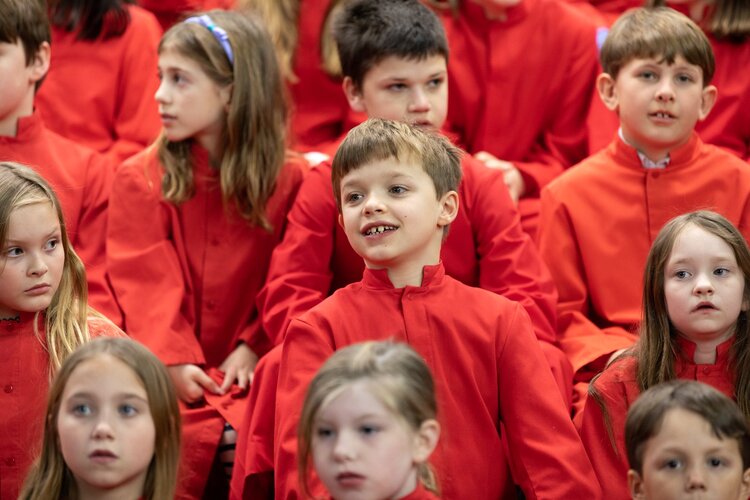 Curry would be a mesmerizing speaker in any setting; but as he blazed through this sermon, moving from point to point in a rapid-fire, get-out-of-your-seats style, while Spanish translator Denora Padro kept pace with him, this was a tour-de-force.

Indeed, the back and forth from English spoken by Curry and Spanish spoken by Padro was like watching an intricate linguistic dance performed by two absolute masters—like watching the Fred Astaire and Ginger Rogers of preaching.

Curry told of taking a sabbatical and trying to learn the violin (“It’s a beautiful instrument,” he quipped, “when IN THE RIGHT HANDS”), adding that his daughter’s rotund cat soon learned to exit the room before Curry even opened the instrument’s case.

Deftly transitioning from the laughter, he recalled what he discovered during the other occupation of his sabbatical: digging into sayings of Jesus that can sometimes make following Jesus so difficult and strenuous—wonderful but challenging statements about peacemakers, about forgiveness, about doing unto others, and about loving God and your neighbors as yourself.

That last commandment should be regarded, Curry said, as the “holy trinity of love.” Love of the neighbor defies political views, he went on, and it knows no nationality or particular religion. “Love your neighbor is Affirmative Action on steroids.”

Delivering his sermon in the round, speaking directly to various audience segments as he pivoted around the stage, Curry referred at one point to Delta, the airline that famously makes Atlanta its hub. At first this was a kind of wry wink to the audience, but it became a means to examine bigger questions about where and when we access faith.

Just as we trust the unseen pilot transporting us from one part of the world to another, Curry said, so we should place our faith in God’s ability to steer the way, as long as we stay in the Way of Love.

“In the end, it’s a matter of trusting God.” 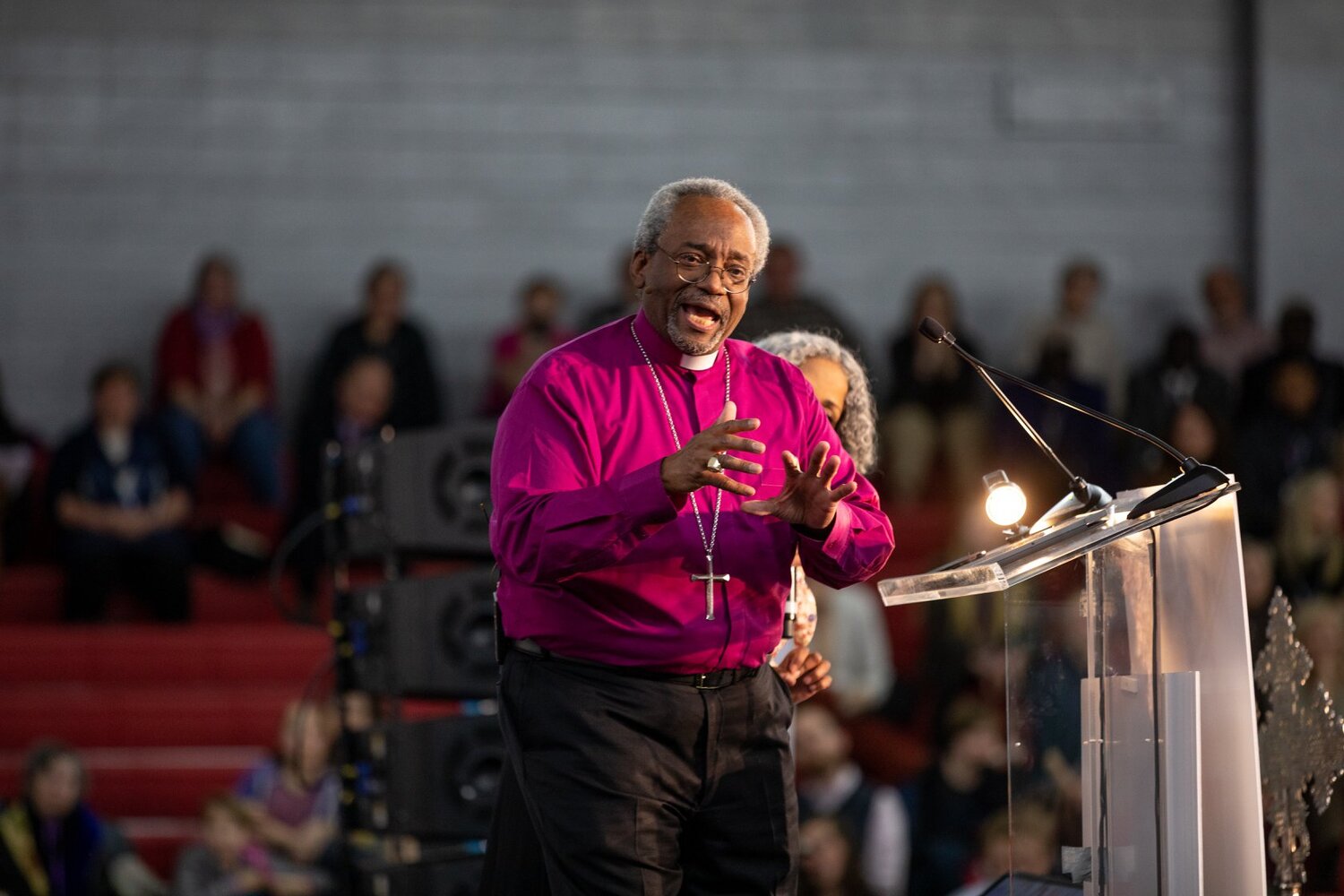